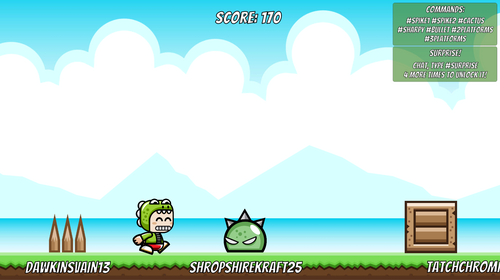 Patch version 1.2 is out for Running Vs Chat, which adds the last critical changes after the original Game Jam. This puts it in a stable state to be played by any Twitch streamer.

Patch Notes for version 1.2:
- Added an audio control slider on the title screen
- Implemented a Mod Spam Filter (puts a limit on how many chat commands can be used by the same person in a short amount of time, which was usually abused to an extreme degree by very sneaky mods)
- Ensured that a specific Surprise will always be the first one the streamer encounters when playing the game for the very first time
- Nerfed one of the Surprises slightly
- Added links to this Itch.io page and other sources on the title screen

Endless runner for Twitch streamers where Chat creates all the obstacles for the streamer!